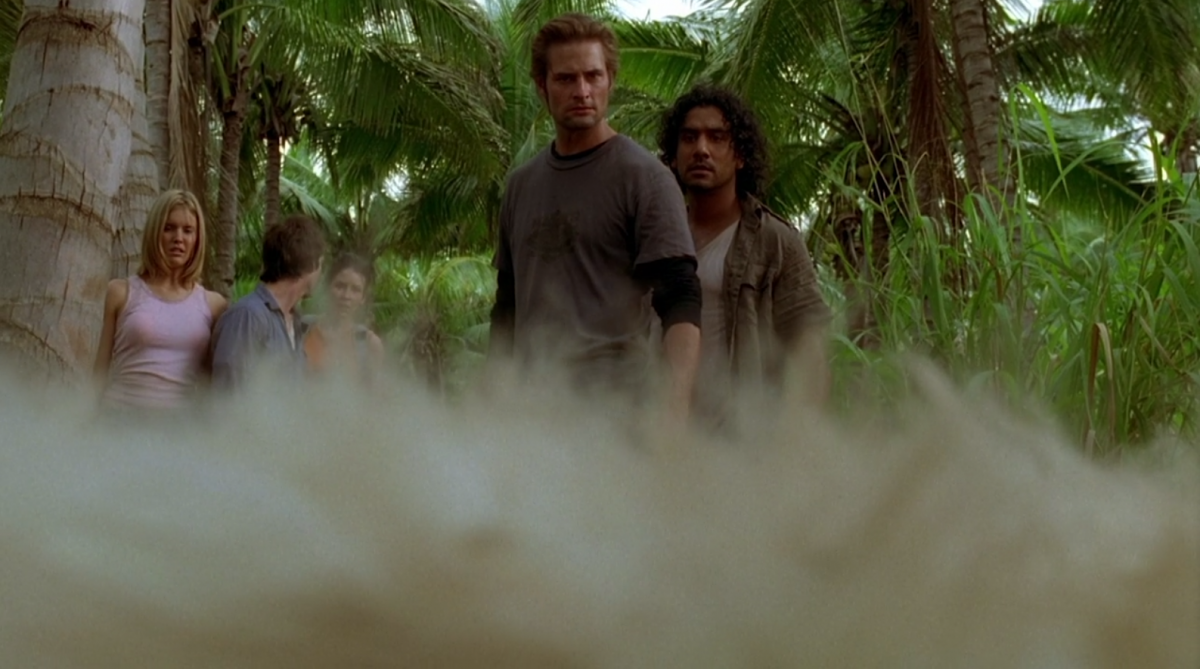 I suppose I could have lumped this episode in with the first and written about the pilot in all of its two-hour-long glory, but it broadcast as two separate episodes and I have opinions for every hour of LOST and so here we are.

Once more, there’s a lot here. While the first half of the pilot set the tone for the series, hinting at its intoxicating mix of familiar real-life tragedy and supernatural mystery, this second half invests in what will become the lifeblood of the series: the histories, motivations, and foibles of the unlikely cast of characters stuck on this island together.

Are you going on the hike? I’m definitely going. When we get home, I’ll get you a new dog.

The cockpit gang returns from their little monster adventure, and after Charlie attempts to charm Kate (who, let’s admit it, is already halfway Jack-smitten), we jump back to our first meaty backstory flashback where we learn that Charlie is a junkie! Poor Charlie.

Jin prepares sea urchin and blatantly asserts his patriarchy while Michael looks for his son. Where’s Walt? Just finding handcuffs in the jungle, like you do.

Those handcuffs lead to fisticuffs betwixt resident gun-show-owners Sawyer and Sayid before the cockpit crew comes to break it up. Hurley and Sayid bond over Sawyer’s grumpiness before Sayid drops some knowledge: maybe he is a terrorist after all!

Kate takes a male-gaze-y sea bath, gets a quick “can you hear me now?” lesson from Sayid, suspiciously pokes around Jack’s doomed shrapnel victim, and makes Jack uncomfortable because he won’t get to lead every single jungle expedition ever, all within a few minutes.

Walt finds a Spanish comic book while Michael, playing the role of clueless dad, says the worst possible thing to a son who lost his dog. Look, even if you’re not stranded on a monster island with a son you don’t know, a replacement dog is not going to go over well. It’s never a good time to talk about replacement dogs.

The transceiver hike picks up steam and a few more participants. In the end, it’s Sayid, Kate, Shannon, Boone, Charlie, and Sawyer all trekking through monster jungle to get to higher ground. Along the way, they find adventure (a polar bear!), surprise (Sawyer has a gun!), suspicion (there was a criminal on the plane! And it’s Kate! But only the marshal knows that! But he wakes up!), and whaaaaat (an ominous French transmission that’s been playing for 16 years).

Once again, Charlie sums it up pretty well when he mutters, “Guys…where are we?”

While this hour is a satisfying hour of television all on its own, I feel like it really shines when viewed as a mirror companion to Part 1.

While the plot continues from where it left off, the style and method of storytelling shifts subtly yet meaningfully. For one thing, the horror tropes that inundate the first hour give way to more common action tropes. We get more scenes of the plane crash, including a stunning bit where the back of the plane breaks off. We also get numerous moments that remind us that having seat belts on planes is a good idea – two extras, along with Charlie, get the ol’ slam into the ceiling of a plane treatment. Charlie even almost gets slammed into by a beverage cart!

But why? Why give up on the horror beats that were working so well in the first hour? LOST is creating its careful balance between the real and the supernatural. Too many jump scares (notice that the polar bear and marshal awakening in this episode are played more for action than surprise) and the show seems like it’s a horror show. Too few and it feels like Law & Order. In order to walk the line, the show must play to both sides.

Speaking of showing sides, this second hour also does a great job packing in just enough character bits and bots to offset the show’s almost intentional dearth of character backstories in Part 1.

Who do we learn more about? Each character gets just a hint of backstory – enough to not only give some insight into them, but also to prompt us to ask the key question: how did they get from there to here?

These characters are who we’ll be spending 6 seasons with. These characters are who the show wants us to care about. Knowing that, the seeds are being sown here to show that though the show strives to provide island plot that will be compelling and interesting (monster and all), there’s more. There are stories of who these people are, what they’ve done, why they’re the way they are. There’s a hint that these stories may be as – if not more – interesting to tell.

One last quick note about this episode: Sayid is extraordinarily competent with everything he touches. Not only does he fix the broken transceiver, he does the mental arithmetic to translate the iteration number (17,294,533) with a rough timing of 30 seconds into the very exact estimate of 16 years, 5 months. What a smart guy!

I’m tempted to say Sayid, because he totally Macgyvers the transceiver, but I feel like this may be one of my few chances to give Shannon her due. Though she antagonizes Boone, she comes through in the clutch and translates the French transmission when everyone is counting on her.

Jin! Look, the sea urchin was a nice if misguided gesture, but chastising your wife for not having her shirt fully buttoned (ON A TROPICAL ISLAND) and then swatting her hand like a naughty child? That’s pretty low, even on an episode when every line out of Sawyer’s mouth is insulting.

Also, that scene where the baggage comes out of the overhead compartment and hits the marshal on the head and his head starts bleeding. I’ve seen it enough times now that I’m starting to be OK with it, but the first 17 times it happened, it gave me jeebies all over my body in places I do not want jeebies.

Everywhere he’s not supposed to be. Trying to find his dog in the jungle on his own. Learning backgammon from a weird scarred bald man.